Gas Board Interference Problem to their communication system which was located above their showroom in Westow Hill Crystal Place. This system was used by the Gas Board to communicate with their staff who where working out across London & the South East. No Mobile Phones In Those Days.

Gas leaks as we all have seen can cause devastation if not dealt with quickly. All GB engineers had transceivers with them, so could be moved to any problem that occurred fast. The receivers at CP picked up the engineers comments and then relayed them to the management who made the all important decisions and sent back any instructions. 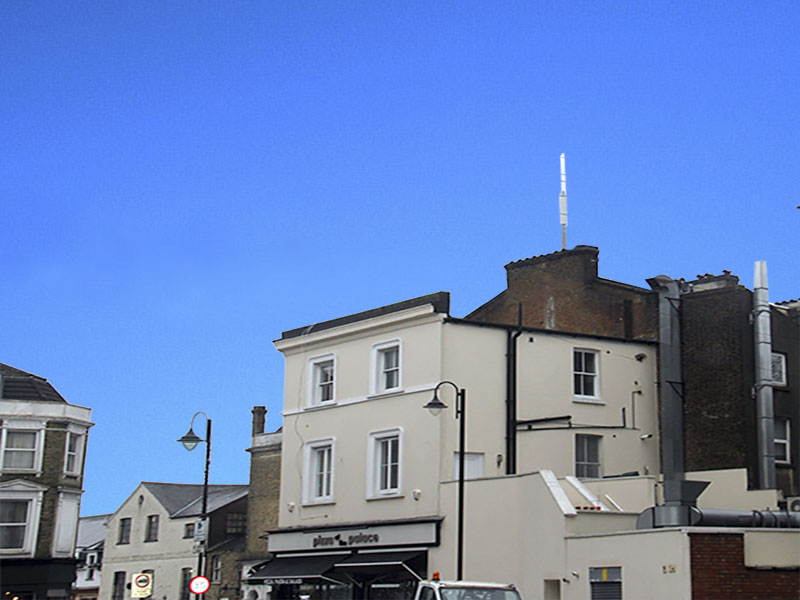 With the broadcast band now open 88 MHz vhf – 108MHz vhf (police and emergency services until early 84 used 100-108 MHz vhf+). At this time no other legal radio stations were in that area of the band so very clean. ET our brilliant audio man had created a BBC spec stereo encoder, so suggested we move up to the clear area of the VHF band to get the best stereo signal out to listeners. ET choose 104fm and that is where Horizon went in March 84. Horizon Radio had started broadcasting 24/7. JFM on 102.8FM was at this time only broadcasting at the weekend.  A week later Mr Gotts phoned up and asked Chris Stewart to meet him at the Horizon Radio Transmitter site. Chris had just 30 mins to get there or else the transmitter would be removed said Mr Gotts. On route one question, why did Mr Gotts phone, when in the past he just took the transmitters. Now confirmed he could not take the transmitter without a court order, as it was on private property.

On arrival at transmitter site at 70 Westow Hill along with some of the Horizon team, Mr Gotts wants to photograph and test the transmitter and record the details. Police were there and also a man in dark clothing (overcoat) and wearing a suit. Everyone went up to the roof. Eric (Mr Gotts) photographed the Horizon Radio equipment and starts testing. Then Mr Gotts (RID) starts to pack the transmitter and sticks it under is arm and try’s to leave. Horizon team members start to shout at him, just as the man in a suit puts his hand on Chris Stewart’s shoulder’s and says “he cannot take that transmitter, he needs a court order“. That was it, Eric was told if he took another step he would be arrested and reasonable force would be used to stop him taking the transmitter.

Eric, hands Chris the transmitter and says “If you put that back on, I will be back as you are causing interference” Being the person who he was, he would not say to who. The conversation continued from the roof out onto the street, he would not tell the team who interference was being caused to.

Finally as they were leaving, the man in suit leans over to Chris and says “talk to the Gas Board“.

Horizon Telephones The Gas Board

Wednesday Morning, Chris Stewart calls the Gas Board and ask’s to speak to the engineers in the radio communications department. Very surprised, as we got a warm reception. After a brief chat, Horizon Radio was invited down to the Gas Board workshops in Whitehorse Lane, Croydon on Friday morning and asked to take the transmitter with us.

Head scratching time, what the hell is the problem. 2 Minutes of head scratching and ET nailed it in one by asking “Have you got any filters on those receivers“. Gas Board engineer thinks and answers they are wide band receivers. Problem Found! Well Done ET!

It was a tried and tested system the Gas Board had used for years all across the UK and no way were they going to change anything. Fair comment as lives are at risk if leaks where not attended to quickly. More head scratching and the engineer asked, “can you give me some time to think it over this weekend and I will call you Monday morning, but please stay off until we can sort the problem”. Horizon Radio did not broadcast that weekend for the first time in 2 years.

Monday Morning The engineer called & thinks he may have the answer as he says “your 94.5fm transmitter never caused problems to us, lets try that one”. Great Idea, but we had to say that transmitter was in Peckham Rye Hill and not on top of 70 Westow Hill. More thinking time was needed, he said I will call you back.

Just remember these guys could have said sod off guys, we are legal you are not. They did the opposite. They called back later with the question “Can you move the frequency of the transmitter”. Yes we can was the answer. “On Wednesday can you go to your site and set the transmitter up again on 104.5 vhf, call us here on the direct number and we will look at it and see if any changes, if no change we can move the transmitter frequency down towards 94.5 vhf and see what happens. please do not put it back on till Wednesday”.

Wednesday afternoon Chris is at the transmitter site on his own, Anne is in the flat at Comber House and communicating by landline to Gas Board and 2 meters radio to Chris. 104.5 fm fires up and the interference is still the same. “Try 102.5fm he says”. Transmitter fires up, no interference and the Gas Board said “we are OK with you on that frequency”. They ask Anne to ask Chris to call him later or tomorrow for a chat.

Chris called the Gas Board on Thursday Morning, the engineer says we are happy for you to run on 102.5vhf, can you ask the other stations to call me and we will help them. Horizon was back on 24/7 from April 6th until October 11th 1984.

Chris passed the please call message to Bob at Skyline, he said it’s the Gas Boards problem not Skylines (not in those words, a bit more colourful). The message was also passed to Brian at JFM and got much the same response. This was stupid as one phone call would have solved the Gas Board interference problem once and for all. The Gas Board communication engineers asked Chris 5 times over the next 3 weeks to talk to Brian at JFM, but every time Chris tried, he got verbal abuse from Brian, except for the last time they spoke and Brian calmed down when Chris let go at him. That conversation ended with Chris meeting Brian for a coffee at Westow Hill by the transmitter sites. Brian turned up with a filter he said JFM was using, so JFM could not be causing interference, so said his engineer. Chris explained to Brian that it was any frequency above 102.6fm that was the problem and JFM on 102.8fm was above the threshold. Brian was thinking Horizon Radio had moved from 104fm to 102.5fm to get the JFM listeners, which was ridiculous as the the two stations were never in competition with each other. Skyline on a lower powered transmitter and a dipole antenna did cause a slight interference, but further away than JFM and Horizon Radio from those receivers and on an antenna that was not so good as JFM and Horizon used as it put the signal forward, so could be tuned out.

The Gas Board Get Upset

The Gas Board (one of the biggest companies in the UK) get very upset with no cooperation, so put pressure on the Radio Interference Department and the Department Of Industry which sees action and law changes that came into effect around September 1984. The Gas Board then employed a team of special investigators to track the JFM studio. The Investigators based themselves above the Gas Board showrooms on Westow Hill, so had a great view of what was going on across the area.

In August 1984 Horizon Radio was tipped off by people who were in the right places and the station was told to be very careful in the forthcoming weeks. All DJ’s on the station were informed and a system was put in place to protect the studio’s and DJ’s. CCTV was installed and DJ’s shown what to do if a RID raid should happen. October the 8th 1984 saw the RID/DTI put together the biggest team of RID staff ever, brought in from all over the UK with the task of finding the JFM studio. They failed to find the JFM studio, so decided to hit the Horizon Radio Studio in Peckham London on the 11th of October 1984 at 14.47pm to show they now meant business.

There was no mixing of transmission signals between the 3 stations involved as some later claimed, It was simply any signal above 102.6fm jammed the Gas Board receivers. Brian could have spoken to the Gas Board and moved to another frequency, but his engineer told him it was not JFM’s fault. The UK’s High Court later disagreed with Brian and his engineer in a big financial way. Solar Radio who went on to use the 102.5vhf frequency that Horizon Radio had pioneered and made so popular never caused any interference problems to those receivers.

That meeting between Brian and Chris did reveled one thing and that was why Tony Monson left JFM. Again Brian took the hiss out of Chris over this, but also thanked him for taking TM of his hands? All done in the Brian Anthony way. What Brian said that day about TM was 100% correct as Chris found out to his own cost later.