Horizon Radio Stolen Studios! Horizon Radio had suffered theft of transmitters and studio equipment in 1983. But to see theft occur again in October 1984, the day after the biggest raid in radio history by the RDI/DTI when the station lost a £20.000 studio by people who you had given the biggest career breaks in their lives too, and then again in November 1985, was a bit too much for anyone to digest. Some people have no morals. and are just out to make a name for themselves, until now?

After the biggest raid in radio history 11/10/1984 by the Radio Interference Department led by Eric Gotts and the DTI resulting in Horizon Radio suffering the loss of a £20.000+ studio, the thefts continued. Friday the 12th of October at 11.22am after Mr Tony Monson was told Horizon Radio would not broadcast again, a meeting was organised with former members of Horizon Radio. The meeting was said to have been organised by Tony Monson (according to a DJ who got a call that day). The meeting may have taken place at the Horizon Radio Complex in Peckham? Should this have occurred on those premises Mr Monson had no right to use that venue as rent for the flat was paid by Horizon Radio. 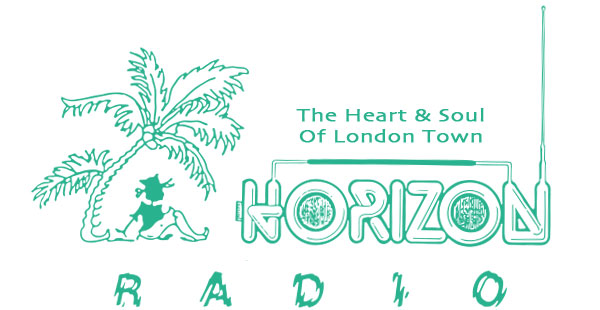 On route to that meeting Tony Scales called in to visit Chris Stewart and issued the threat “I am not coming in Chris, I am here to tell you If you put Horizon Radio back on 102.5 I will kill you“. Today in 2022 that is still a Cold Case as never closed.

Mr Monsons meeting took place and we think DJ Careless, Paul Buick, Tony Scales, Howe and others were there. That night Studio Equipment, Tascam Portastudio along with a Frequency Counter,  Technics Turntable Cartridges and Needles, Outside Broadcast transmitter along with tools kept on site for emergencies, grew legs and disappeared. Not to worry only another £2.5k+ stolen. Only two people there would have known what the frequency counter, transistors and OB unit were and that was Mr Buick and Mr Howe.

Mr Monson Is Asked About The Theft

So Mr Monson knows nothing about the theft, but the voice you heard above Oi Oi Oi?  says it’s nothing to do with him, but the agenda came up at a meeting and he said the equipment should be given back and “can’t you do without the transistors? Come on theft is theft maybe not if you were a member of the Solar Radio team in 1984. In the rest of the world theft is theft.

Horizon Radio Stolen Studios, Who stole that equipment? Who do you think?

Near the end of Horizon Radio, just before the station finally closed on the 15th of September 1985 Horizon Radio was creating a radio training studio. The Idea had come from Chris Stewart who attended the last National Broadcasting School course back in January until April 1985 when the school closed down. The concept of the training which Horizon had planned to do there, was to introduce would be DJ’s/Presenters and backroom people to radio studio operations. It was also another way of showing the Independent Broadcasting Authority, Horizon Radio was serious about never broadcasting again illegally. The station had broadcast for 4 years and had shown there was a need for new radio licenses. During those 4 years the station had built up a reputation as a professional broadcaster and had got recommendations from the right people in authority and it’s listeners who had sent in petition forms to the Rht Douglas Richard Hurd,   Home Office Minster.

During the construction of that radio training studio, Solar Radio (still on air) turned up at 62 Westow Hill Crystal Palace and were about to start putting a studio in the lower basement of the  same building Horizon had been using for 5 months with out being detected. There was no option but to go to the Solar Radio team and tell them Horizon Radio had a complex on floor 2. Chris Stewart went out to speak to them and was greeted by Mr Tony (I will Kill You) Scales who said What the F–k do you want? That sort of says what kind of people you had to deal with in those days.

Solar Radio now knowing Horizon Radio had operated upstairs (5 months undetected), chose to not to put their studio in that building (Thankfully). This was close to the end of Horizons broadcasting days and the station shut down. The last shows of the 15th of September 1985 came from that broadcast training studio.

Theft Of The Training Studio

A few weeks later while a meeting was in progress at Comber House taking about taking the Training Studio further, the telephone rings. On the telephone and it was about 20.30pm was Mr Paul Buick. Mr Buick says (From the recording) “Hi Chris me and Roger are in Westow Hill and we are watching Zak and Ron Tom with the LWR crew as they nick your studio” Most honest people would have called the police first and taken reg numbers of cars involved, but not Paul Buick. The Horizon Team go up to the Westow Hill studio and bump into Buick and Howe who had big smirks on their faces. On arrival at the studio complex and sure enough studio 1 except for the man desk (too heavy) (See Pic) and studio 2 had grown legs. Buick was adamant that Zak and Ron Tom from LWR had stolen the equipment (with even bigger smirks on their faces). As soon as the police were called Buick and Howe legged it so fast, we did not even see which direction they left in. That event was recorded by the police and yet again more bad publicity for the new emerging radio network. 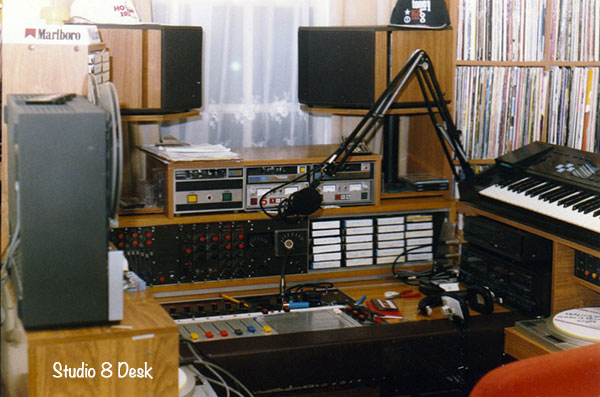 Just the Broadcast Desk in the photo above was the desk that was at Westow Hill that evening when Buick called.

Fast forward to January 2018 when this website first came up on line to finally put to rest the farmyard manure that Solar Radio had been spreading about Horizon Radio and its owner over the years. The Solar Radio Pirate Special of October 2017 was the last straw?<<<.

We receive an email off this website from a IP address located at Garth Rd Morden. Yes we track all those who try it on so easy to do when you have been in the web business since 1995? The email said “Ha ha ha loser, I know where your equipment went, f–k-ng idiot as you are“. The email also had a photo attached to it which is below.

Studio equipment above looks a bit like the one we found on a certain facebook page when having a look around. (Now deleted we see) but we did screen grab the facebook page before it was deleted. 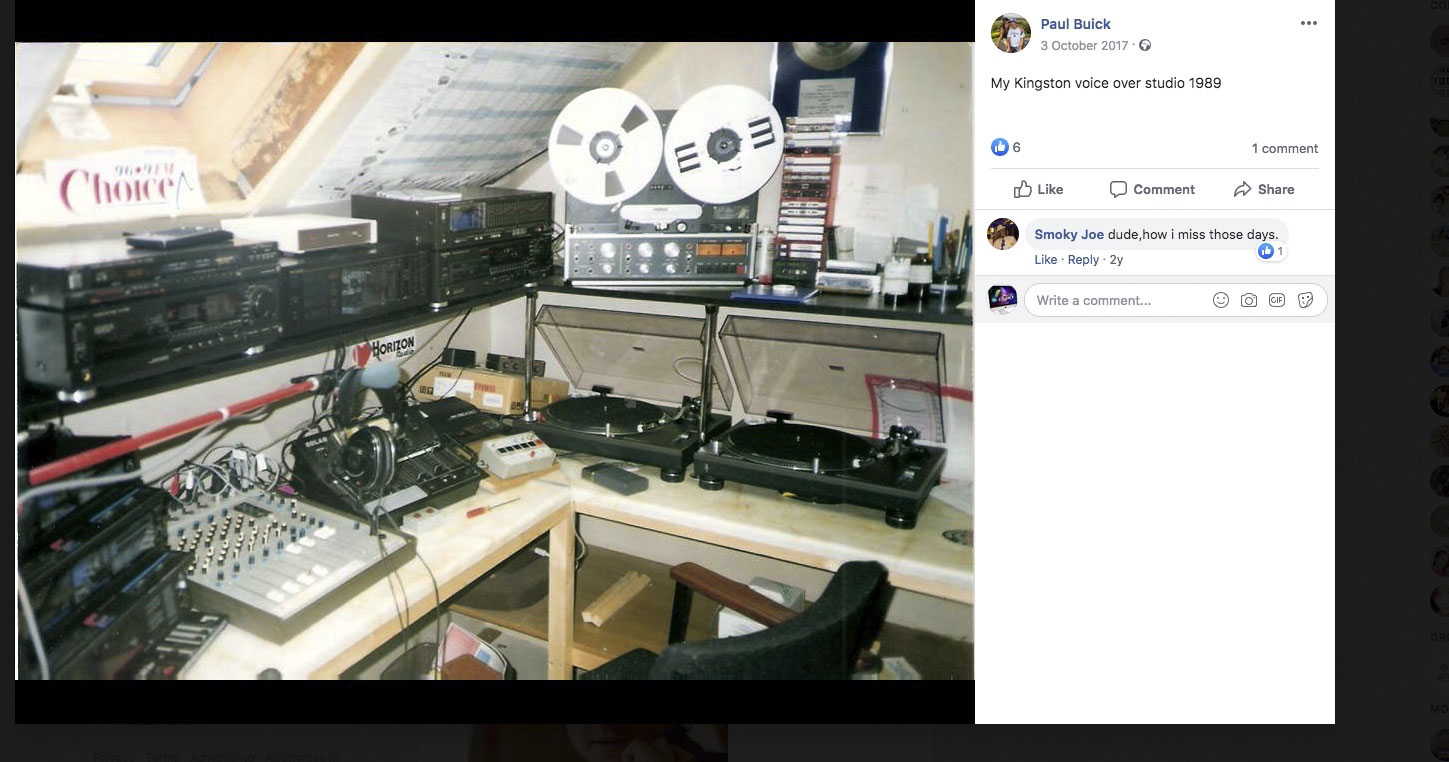 Who knows, only you can make up your mind on this one, but we do know what was stolen that night.

Oh Well you live and learn? Well some people do, others are just thieves & liars. No wonder those 1986 radio licenses that many had worked so hard for over the years were cancelled.

If you ever get told living in Thailand is a dream, not when you have to put up with these restrictions, Its a Pay to Stay Situation?

Just encase you are thinking of retiring to Thailand, where many do a runner to. This is what you have to put up with.

More Info, just go to thaivisa.com now aseannow.com, they have everything you need to know and more.

See you again around your 65th Birthday and enjoy your stay in the Bangkok Hilton (Jail) awaiting deportation!. Go Fund Me Pages sometimes work for some?