Horizon Radio Studio Link was used to get the output from the hidden studio to the main transmitter site. This was just away to try and protect the studio and DJ’s while they where doing their shows. In those days we used higher frequency’s on a narrow beam path, which made tracking those studio’s close to impossible as the equipment needed to track, was not available to Mr Gotts & Co (RID) until around the winter time 1984.

The Horizon Radio Studio link transmitter was low powered and located in the studio that sent the output of the station up to the main transmitter that re-broadcast it on the stations chosen frequency on band 2 (the broadcast band 88 to 108 MHz VHF).

Some of the stations at the time where using band 3 around 220meg MHz UHF. The idea was just to have the link signal go in one direction from the studio direct to the receiver on the transmitter site on the narrowest beam possible, thus harder to find.

Horizon’s Radio’s link was on band 4, the transmitter was around 460/470 MHz UHF and we also used a Yagi antenna, which was very directional.

Pyers Easton again we have to thank for this as he saw a couple of transceivers we acquire from our connection at the caretakers. The transceivers were given to us at the time of the keys and uniforms, (our man said), “these will help you look more official”.

Pyers really did a magical job with these, as they where rubbish so the caretakers said, as they were always breaking down and not working. The transceivers were being phased out at the time. Two-tone blue in colour, they came as a matched pair, a transmitter and a receiver. Small enough to fit both in the top pocket of the caretaker’s uniform

If memory serves us right it took Pyers a few days to convert them for use as a link. He redesigned the transmitter part, added new transistors and came up with a 1.5 watt link transmitter that sat in a small die cast box in the studio.

The receiver part also got the Pyers treatment, most of the receiver was binned. The output IF was at 10.7 MHz, so that was fed into a standard WBFM IF strip de modulator kit from Maplin. It did not stop there. In went a relay, so as the receiver the got the signal from the studio, it switched the relay that put 12 volts onto the exciter (first part of main transmitter) and the transmitter on main site fires up. The PA or power amp always had volts on it, so just needed the drive to start up.

With hidden transmitters on Rye Hill Park, this meant we did not 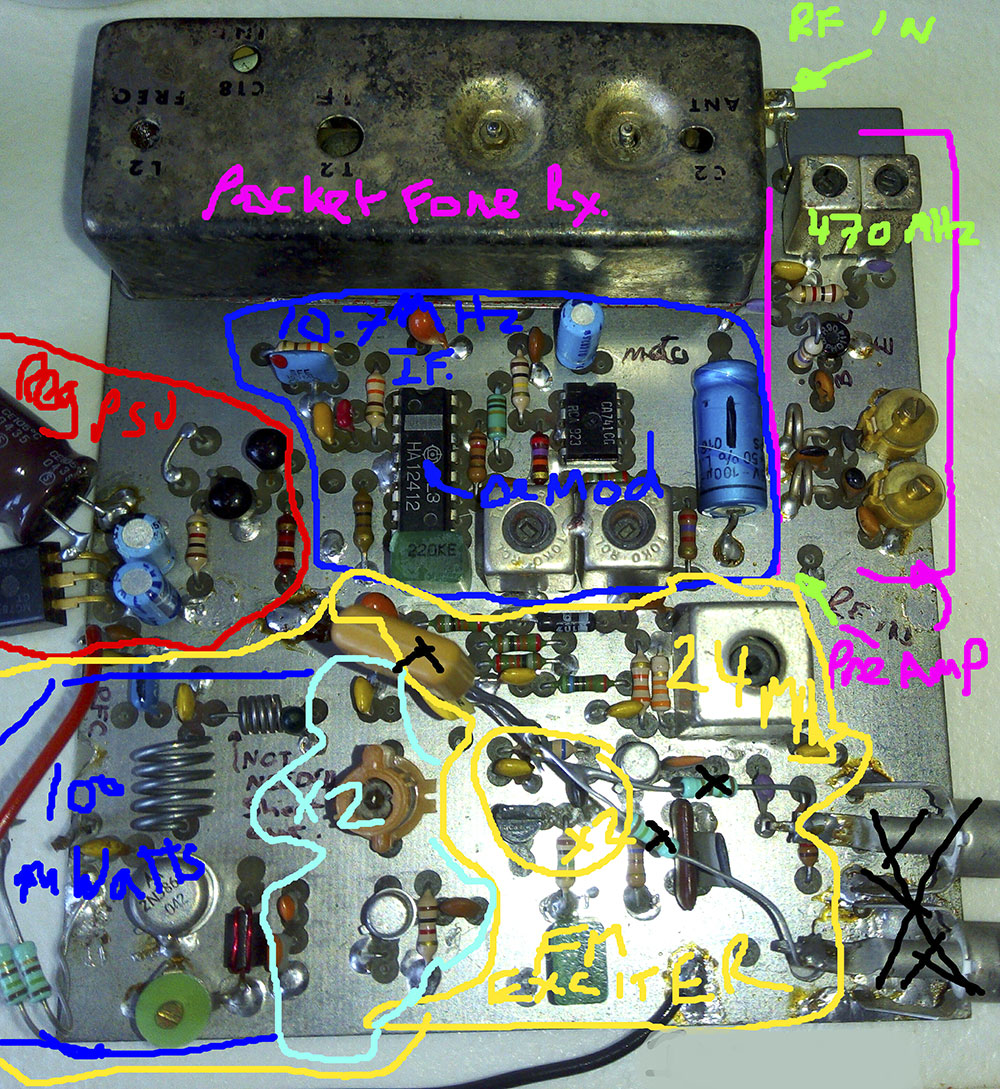 even go there for months on end. On the odd occasion we did have to go up, it was either someone had been on the roof and in the process had tripped the hidden system Horizon Radio had there or Eric had paid a visit.

This link system was used from around July 1982, right up to October the 11th 1984. It only ever gave one problem during that time and that was on the Duggies alldayer of 1984 when an output transistor popped and took us off air for 12 hours. Pyers Easton Engineering for you, simply the best RF engineer of that time.

Linking this way was instant as you could plug a pair of headphones into a radio monitoring your broadcast frequency and talk on the mic with no noticeable delay. On the web today that is impossible as you have at least a 20 seconds plus delay.

Horizon Radio’s first outside broadcast took place in Camberwell in 1982 and if the truth is known, just 100 meters from the studio in the roof at Comber House. We used a radio mic, not great as if you moved or someone got between the mic and the receiver aerial that was up at the studio, it cut out as radio microphones are low power.

Our first live Alldayer broadcast came from The Podium, Nine Elms Lane, Vauxhall, London. That was the day Vauxhall became a Roadblock and the original Soul Family was created. The link was 15 Watts on Band-III VHF around 221MHz. The signal was sent to the studio in the roof in Comber House, then went through the desk and was resent to the main transmitter at Peckham Rye Hill Park on 461 MHz.

The live close down farewell party at Harrow Leisure Center on the 15th of September 1985 also came off our OB unit, but because of the distance from Harrow to Westow Hill, the transmitter was upped in power to 30 watts. To protect the studio at Crystal Palace we had to drop the studio link and allow Harrow in. It worked perfectly with the last 8 hours of Horizon Radio coming from Harrow with the Soul family, the Artists and the DJ’s all together for the final time.

This came into the hands of the DTI and the Gas Board during the Winter of 1984. We where told about this in January 1985? The tracking equipment came from the USA, where it had been used for tracking fish of all things.

Recorded conversion with the Investigators trying to track JFM Jan 1985

Thanks to ET for the photo’s of the receiver that still remains today!