Horizon Radio Events, started in early 1983. Horizon Radio ventured out of those hidden radio studios and into clubland with the creation of the Bank Holiday special alldayers.

The events ran from early in the afternoon right up until midnight+. Horizon Radio Events took place at many locations across London with Kisses Nightclub in Peckham being Horizon Radio’s first alldayer. The club was full to the rafters within minutes of the doors being opened at 4pm. Every bank holiday thereafter saw an Horizon Radio event, which always featured top PA’s from the Soul and Reggae artists of the day along with the Horizon Radio DJ’s.

Bringing The Soul Family Together

The Horizon Radio Events started in early in 1983 with the first event being held at Kisses Night Club in Peckham. This was a way of seeing just how much support Horizon Radio really had. The event started at 4pm and ran until midnight on a bank holiday Sunday. This event was not broadcast live but was still full to the rafters with Horizon Radio supporters. 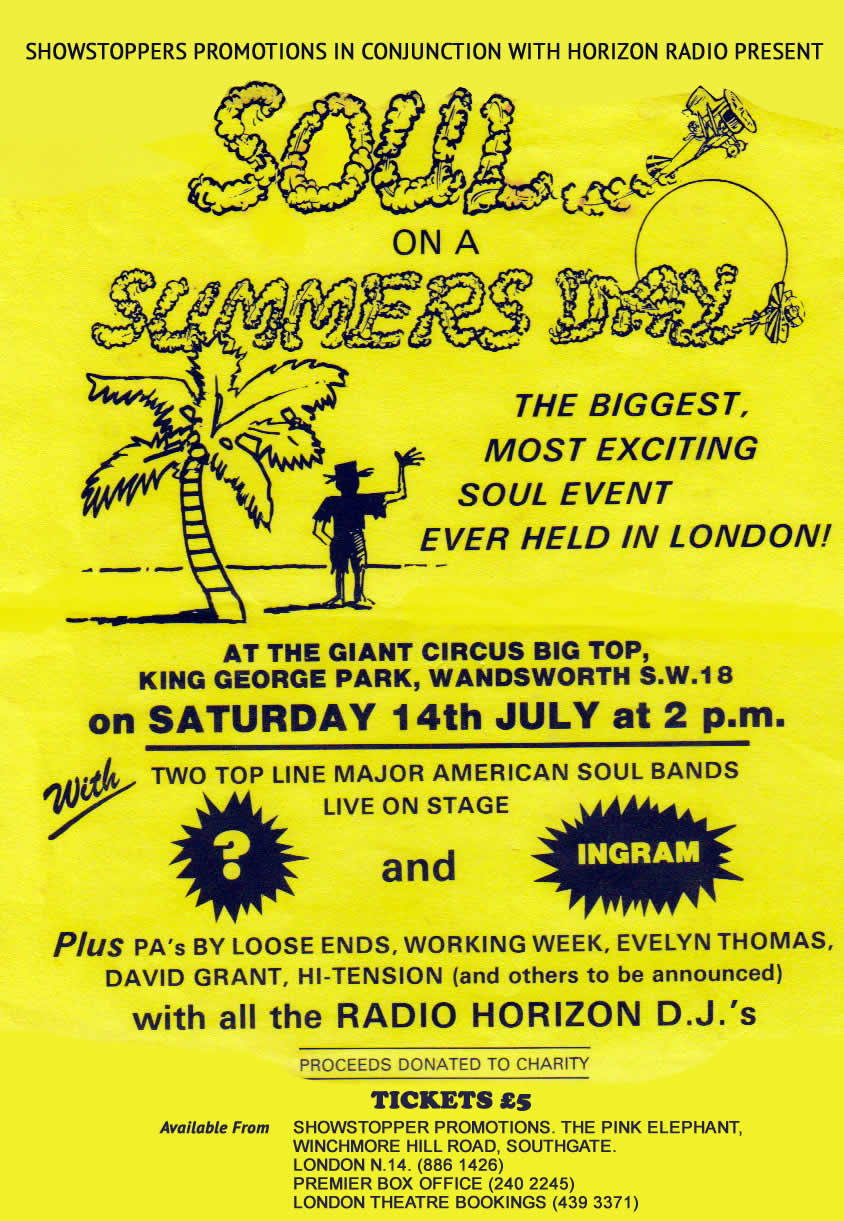 After this event the Horizon Radio telephone was bombarded with listeners asking the question “When is the next event and can we buy tickets in advance”. An answerphone had to be installed, as there where so many calls.

Because of the feedback Horizon Radio received, they decided that on every bank holiday, an event would be organized to bring the Horizon Radio Soul Family together. Event two also came from Kisses nightclub during Easter 1983. No live broadcast as the main transmitter at 1 Greystead Road Forest Hill fell into the hands of “Eric the killjoy” (RID) that afternoon. 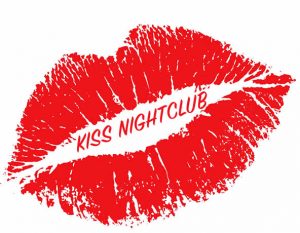 Even with no live broadcast, Kisses was full within minutes of the doors being opened, with queues outside over 100 yards long. The next bank holiday was  August of 1983 and Horizon knew a larger venue would be needed. So a move to the Podium at 1 Nine Elms Lane Vauxhall took place. The venue was full to the rafters again. Horizon had many PA’s from the top artists of the day including 5 Star, plus many more.

August Bank holiday Sunday of 1983 saw the first live event outside broadcast take place. This again came from the Podium with a link going back to the studio in Camberwell and then out live over London via our main transmitter which was located on Nunhead Peckham Rye. This event saw Vauxhall, London grind to a holt. A real roadblock. Capital Radio, LBC and Radio London were putting out road traffic reports warning there was an event going in Vauxhall that had blocked all roads within the vicinity. Horizon Radio showing the need for a broadcaster with the love of the music, just like it’s listeners had. 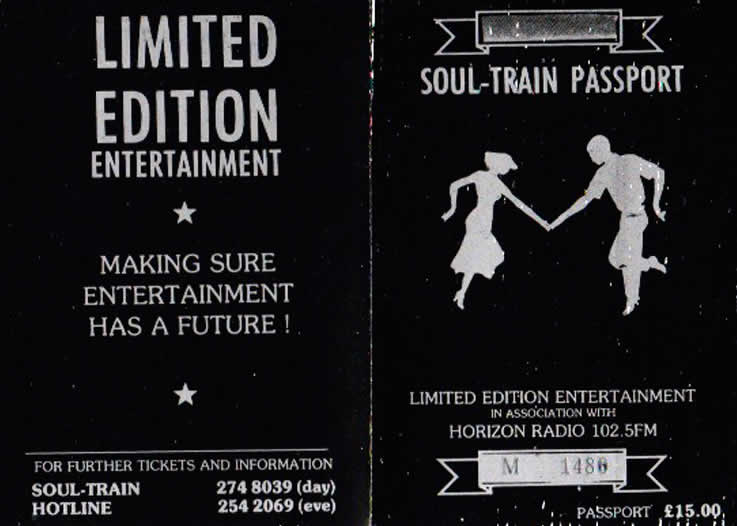 The Soul Train Event was organised by Len & Glen of Limited Edition Entertainments in association with Horizon Radio. Leaving from one of London’s mainline terminals on a specially charted train to Great Yarmouth.

The event took place over that very busy August 1984 Bank Holiday weekend. First a bit of relaxation on the beach, then off to a local nightclub to party into the small hours followed by a mad dash back to London for the Horizon radio Alldayer.

Was this the first Great Yarmouth event, we wonder? 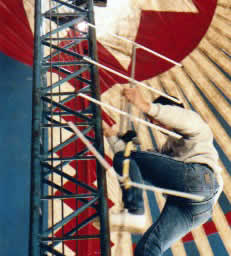 The Soul on a Summers Day event was put on by Showstopper Promotions and Horizon Radio under the Big Top Circus Tent located in King Georges Park Wandsworth. This was truly one of the most memorable events in the history of Horizon Radio.

We came in on this promotion very late, just two weeks to go. The live band line up was from the USA, It was Yes the brilliant Change and Ingram with PA’s by Loose Ends, David Grant, Evelyn Thomas, Working Week and many more. A live broadcast “possible” “did happen” but our friend the policeman who was keeping an eye open for us? Superb event and only cost £5 to get to see Change and Ingram play live and the Horizon Radio DJ’s cranked up the party (except for Mr M who almost flattened it). Photo is of the Outside Broadcast Aerial being installed.

The Close Down Party 15th of September 1985 Harrow Leisure Center

The event of all events, The Horizon Radio Close down party of September 1985. Held at the biggest venue Horizon Radio could hire at that time. The Harrow Leisure Center. The event featured 25+ Artists/Bands who came to say farewell to Horizon Radio. PA’s. + a live band (911) and all of the Horizon Radio DJ’s of 1985, who where simply brilliant and many as you know went on to legal radio after Horizon Radio closed. 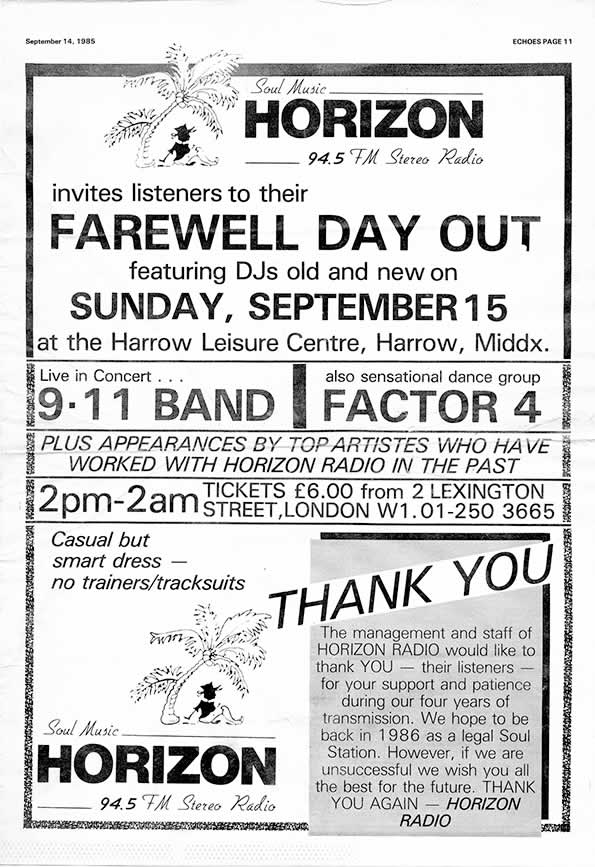 he event was broadcast live for 8 hours via the OB link all the way from Harrow and to safeguard the new studio at Westow Hill, which had been created to train broadcasters after Horizon Radio had closed, there was no chat on changeover as the studio connection had to be dropped and transmitter removed for security of the studio. Barry Jones Horizon Radio’s Drive Time DJ took over at Harrow and just like his radio shows he was brilliant. He got the Horizon Radio family to fever pitch and the party started and rocked until 2am.

Steve Walsh (RIP) even dropped in to say goodbye and said on the mic live over airways “Horizon Radio was by far the best soul radio station ever in London and possible the world, no one else ever came close” Steve later said to Chris Stewart why did you not ask me to come on Horizon Radio, I could have brought you many listeners. Chris replied Steve, Horizon Radio is bigger than all of the DJ’s, so you should have asked to become a member of the family and should you have asked, you would have been a member. Steve replied “Oh S>>> wish I had known that”.

Why Did Horizon Radio Closed Down

Horizon Radio closed down to apply for a radio license 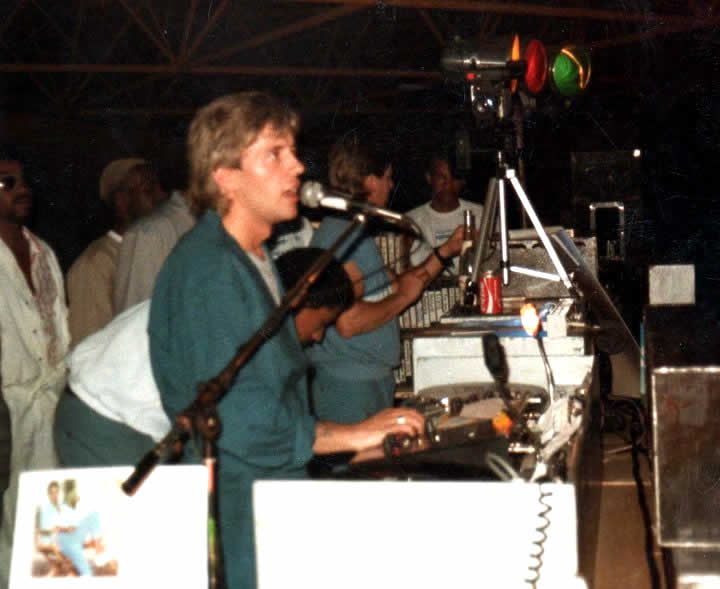 under the new IBA rules. We stuck to our agreement that we would cease broadcasting and take the legal route to become a much-needed broadcaster. Horizon Radio did not get the radio broadcast license, but we stuck to our agreement made to the Independent Broadcast Authority (IBA) that we would not broadcast again unless we where offered a license. Horizon Radio was the only Radio Station of the era that said it would accept the decision of the IBA and the only unlicensed radio station that stood by its statement. We did not apply for the 1988 license, due to what had happened in the Pirate Radio World back in 1986 when Solar Radio forged documents to say they were the NO 1 station in London. We did not want to be tared with the same brush.

For those of you who want to know what happened to the Studio complex Horizon Radio created at Westow Hill Crystal Palace to teach people how to use a radio studio and create demos tapes to send to radio stations (An idea Chris Stewart came up with after attending the final National Broadcasting School Course of 1985 before that closed). Well it is sad news, just after Horizon Radio closed, the complex which had 2 studios in it, all with top class equipment was broken into and the equipment stolen. A former colleague of old phoned to say they saw another radio station (pirate) breaking into the studio complex. We always wondered why they did not just call the police and then Horizon after. In 2018 via this website an email arrived pointing to a facebook page where you can see some equipment that looks similar to what was stolen that day. Was it Horizons Studio Equipment? We do not know?

But lets leave this page on a positive note with the memories of the Horizon Radio Events that gave so much joy to thousands of its listeners. No one else can claim what Horizon Radio with its family of listeners achieved. Some will try, but remember there are Liars, Cheats and Thieves out there. Remember the jingle? Horizon Radio, The Heart & Soul Of London Town?